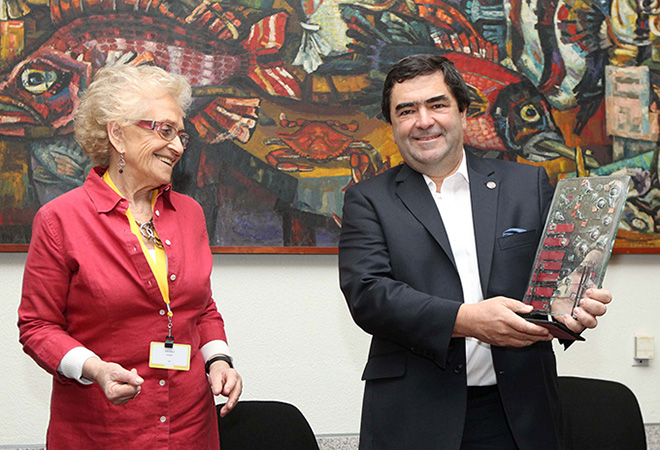 Yesterday, as part of the activities organized within the framework of the Regional Internet Governance Forum (LACIGF) currently being held in Mexico City, noted scientist Ida Holz presented LACNIC's 2015 Outstanding Achievement Award to Raul Echeberría, thus recognizing his contribution to Internet development in Latin America and the Caribbean.

The Lifetime Achievement Award was established by the LACNIC Board of Directors to honor those individuals who have long devoted their efforts to the development of the Information Society within the region and whose achievements have set an example for the rest of the community. Since its creation in 2009, fifteen of these awards have been presented.

The judging panel for the 2015 Lifetime Achievement Award was made up by Ben Petrazzini, Carolina Aguerre, Elgeline Martis, Ida Holz, Jesús Martínez, Rafael Ibarra, Rodrigo de la Parra and Selby Wilson. After a thorough and extensive process, the jurors decided that the winner of the 2015 Award would be Raul Echeberría.

Echeberría is a Uruguayan national who has played an active role in the development of the Latin American and Caribbean Internet community, particularly from his position as LACNIC's CEO (2002 - 2014), but also through pioneering regional coordination and training spaces such as ENRED and WALC. Echeberría's work at global level has also been outstanding: he served on the Internet Society Board of Trustees and was the first Latin American to chair this organ.

In recent years, he has been an advocate for the multistakeholder model and a promoter of the inclusion of Human Rights in Internet discussions.

Raul Echeberría has helped raise the region's ability to influence the international Internet community. He has always advocated for the values on which the Internet was built: collaboration, openness, transparency, participation.