The Policy Development Process (PDP) is an essential part of the services provided by the Regional Internet Registry (RIR). It is through this process that the creation and modification of the policies that the RIR will implement within its region are validated.

This document describes the two options considered by the LACNIC policy development process (normal and expedited), the mechanisms that allow for its operation, and the appeal system.

Achieving consensus indicates that the proposal has been discussed by its author or authors, as well as other members of the community regardless of number, and after a period of discussion all critical technical objections have been resolved. Arriving at consensus does not mean that any proposal has been voted for or against; it is also not dependent on LACNIC having counted the number of  yeses, noes and abstentions logged by participants to a particular policy.

In general, the achievement of consensus tends to coincide with a majority of community members expressing support for the proposal; those who are against the proposal are expected to base their objections on technical reasons as opposed to subjective concerns. Minimal participation in a related discussion or participants who disagree for reasons that are not adequately explained should not be considered a lack of consensus.

A proposal is not evaluated on the basis of the number of objections raised, but instead by the nature and quality of those objections. For example, a member of the community who objects to some technical aspect of a proposal may receive many expressions of support for their opinions; however, the PDP chairs may not take this support into consideration because they regard these objections as having been addressed previously or refuted during the discussion.

The definition of consensus used by the RIRs and the Internet Engineering Task Force (IETF) is actually that of rough consensus, which allows for better clarification of the intended goal. In this context, consensus may be interpreted as agreement by all or unanimity. More specifically, RFC7282, explains that “Rough consensus is achieved when all issues are addressed, but not necessarily accommodated.” Consequently, in this document achieving consensus should be interpreted as having arrived at a rough consensus.

A LACNIC policy proposal is considered to have reached consensus after broad discussion in which it is supported by meaningful opinions and there are no irrefutable technical objections.

LACNIC's PDP will have two chairs, both of whom will perform the same functions.

During its first meeting after the 4-week last call for comments, the LACNIC Board may:Ratify the proposal.

In addition, the Board:

In the case of disagreement during the PDP, any member of the community can bring the matter to the public policy list for initial consideration by the chairs.

Alternately, if any member considers that the chairs have violated the process or were mistaken in their judgement, they may appeal their decision through the board, which must decide the matter within a period of four weeks.

The purpose of the ‘last call’ is to provide the community with a brief, final opportunity to comment on the proposal, especially for those who did not do so previously. Consequently, during this period editorial comments may be submitted, as well as any new [technical] objections that were not considered during the discussion prior to determining the achievement of consensus. Any new objections must be substantiated and must not be based on opinion that lacks a technical justification. 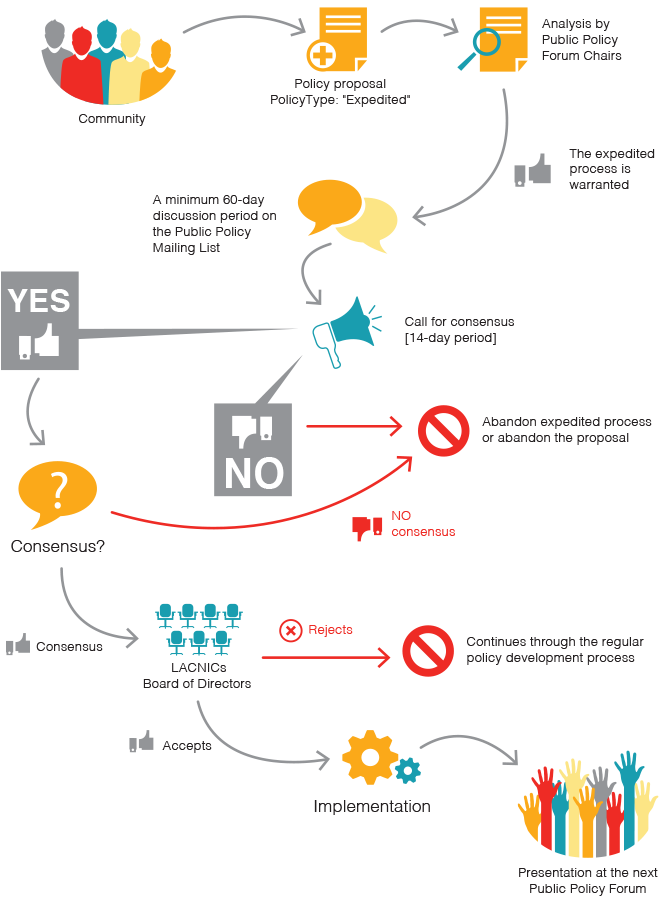 For a policy proposal to qualify for this expedited process it must be analyzed by both Public Policy Forum chairs and they must agree that this proposal should go through an expedited approval process.

At least 60 days after being presented on the list, the Public Policy Forum chairs will evaluate whether the discussion that was generated merits a call for consensus or the abandonment of the expedited process.

If both chairs agree that the policy proposal warrants a call for consensus on the public policy list, the call will give participants at least 14 days to make comments.

Once the period to receive comments is closed, the Public Policy Forum chairs shall communicate whether consensus was attained. If it has done so, the chairs shall submit the proposal to LACNIC's Board of Directors. If it has not done so, the chairs may choose between abandoning the expedited process and continuing the discussion on the public policy list or withdrawing the proposal completely.