An Internet Society committee of experts inducted the Uruguayan scientist, who will join the list of pioneers who helped create the technology that has changed the world. 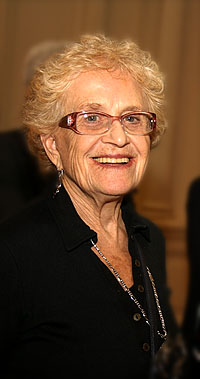 Montevideo, 26 June 2013.- Uruguayan scientist Ida Holz (78) has been inducted by the Internet Society (ISOC) into the Internet Hall of Fame (internethalloffame.org/), the organization announced.

The Internet Hall of Fame is a program established to publicly recognize Internet pioneers and honor individuals who have made significant contributions to the development and advancement of the global Internet.

Ida Holz will join the 33 Internet visionaries, innovators and leaders from around the world who are already members of the Internet Hall of Fame in recognition of their significant contributions to the development and advancement of an open and global Internet. The first Hall of Fame inductees include Jimmy Wales, founder of Wikipedia; Paul Baran, inventor of packet switching techniques; Vinton Cerf and Robert Kah, creators of the TCP/IP protocols; and Lawrence G. Roberts, recognized as one of the fathers of the Internet.

Ida Holz is the only Latin American representative on the list of inductees. "I don't consider myself to be particularly deserving of this recognition. I think they wanted to symbolize in one person their recognition of the tireless work many of us throughout the region have done together aimed at advancing the Internet by strengthening communication and cooperation among individuals," said Holz upon learning of her induction.

Raul Echeberría, Executive Director of the Internet Address Registry for Latin America and Caribbean (LACNIC) and member of the committee of experts in charge of selecting Internet Hall of Fame inductees, commented on Holz's nomination: "She has definitely earned a place among those who played a key role in the promotion of ICT in Latin America for the last 30 years."

Ida Holz (78) is a prominent engineer who was part of the first generation of university graduates trained in Computer Engineering in Uruguay and was a pioneer in building the human network that later allowed Internet development in Latin America and the Caribbean.

Starting in 1987, Ida Holz was in charge of the Central Computer Service at the University of the Republic in Uruguay, where she led the creation of the Uruguayan Academic Network and its connection to the Internet back in the early 90s. The distinguished scientist has played a critical role in ICT development and evolution in Uruguay.

Since 2005 she is a member of the Board of Directors of AGESIC (the Uruguayan Agency for the Information Society), where she had an important part in the success of "Plan Ceibal", the Uruguayan version of the "One laptop per child" program.

Ida Holz's most relevant contributions have been at regional level. During the early 90s, she was part of a group of regional Internet pioneers whose collaborative efforts in search of critical mass and cooperation made possible the development of the first national networks that served as the basis for the development of what is now the Internet in Latin America.

LACNIC, the Internet Address Registry for Latin America and Caribbean, is an international non-government organization established in Uruguay in 2002. It is responsible for assigning and managing Internet numbering resources (IPv4, IPv6), Autonomous System Numbers, Reverse Resolution and other resources for the region of Latin America and the Caribbean. It is one of five existing Regional Internet Registries.

LACNIC contributes to Internet development within the region through an active cooperation policy, promoting and defending the regional community's interests and helping create conditions that will allow the Internet to become an effective instrument for social inclusion and economic development in benefit of all Latin American and Caribbean countries and citizens.