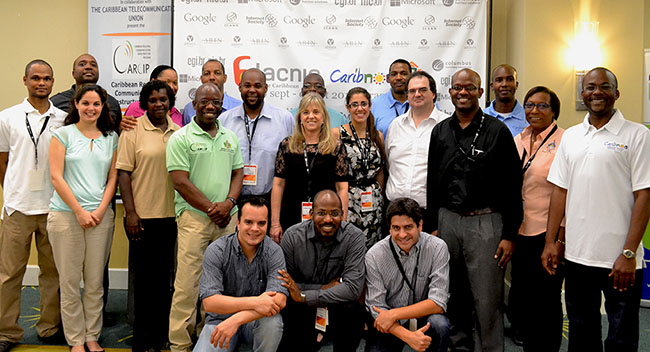 Why data infrastructure upgrades are the next step in regional evolution
Many Caribbean livelihoods are made and lost around seasonal fluctuations in foreigners' travel. For much of the region, tourism, an all-too-inefficient form of intraregional human traffic, is economic lifeblood. But for one group of Caribbean islands, a different kind of traffic is generating a new model for intraregional economic partnership.

Internet traffic-data packets that move across telecommunications networks-is opening new economic possibilities to countries with a historical dependence on tourism. The governments of Grenada, St Lucia and St Vincent and the Grenadines are now working together to update their on-island Internet infrastructure, as part of a wider project to upgrade the data networks across the region.

The Caribbean Telecommunications Union has been tasked with stewardship of the project, called CARCIP, the Caribbean Regional Communications Infrastructure Program. Funded by a US$25 million-dollar allocation from the World Bank, the project has had some success in reducing the gaps in regional broadband connectivity, in order to fostering technology-based innovation.

"We have reached a considerable way towards identifying the countries' infrastructure gaps and providing technical recommendations to address them," said Junior Mc Intyre, head of the CTU project team.

"And we have already started the development of business incubators, skills development and certification programmes."

Christopher Roberts, CARCIP country coordinator in St Lucia, delivered the day's opening presentation, explaining the benefits of one of the main infrastructure upgrades being implemented across the region—the Internet exchange point, known more commonly as an IXP.

The primary role of an IXP is to keep local Internet traffic local and to reduce costs associated with traffic exchanged between ISPs, Roberts said. He explained that an IXP is a facility where networks interconnect, facilitating the exchange of Internet traffic between Internet service providers.

St Lucia is the latest of eight countries to establish an IXP in the region. CARCIP coordinators Roxanne John (Saint Vincent and the Grenadines) and Alice Bain (Grenada) confirmed that their countries were also actively working on fully realising the benefits of IXP deployment at the national level.

Simon Alexander, information technology manager of the Organisation of Eastern Caribbean States (OECS), said, "The CARCIP Day forum has allowed us to have targeted discussions focusing on both the strengths and the weaknesses of sub-regional infrastructure development. The interactions are already having significant impact which could only redound to the region's benefit."

In a post-session interview, Claire Craig, doctoral researcher at The University of the West Indies, said, "Issues of access and connectivity are already dominating the Caribbean conversation about development. There will be a growing demand for access and connectivity caused by the increase in the percentage of Caribbean people using the Internet. This trend is already well documented in ITU Statistics 2014. The implementation of IXPs will address this problem and drive regional development."

CaribNOG 8 is co-sponsored by "LACNIC in the Caribbean 6", an outreach initiative of the South America-based region Internet registry. Over five days, conference sessions aim to cover a range of technology topics including cyber security, cloud computing and mobile broadband.

The meeting brought together representatives from several international multi-stakeholder organisations such as ICANN, CTU, ARIN, ISOC, which facilitate collaborative decision-making in the public interest.

It  is co-sponsored by "LACNIC in the Caribbean 6", an outreach initiative of the South America-based region Internet registry. Over five days, conference sessions aim to cover a range of technology topics including cyber security, cloud computing and mobile broadband.

Nico Scheper, manager of Curacao-based Internet exchange AMS-IX Caribbean, walked participants through the range of services and business opportunities that it offered.

Carlos Martinez, chief technology officer of the Latin American and Caribbean Internet Addresses Registry (LACNIC), demonstrated how Caribbean Internet service providers and other network operators could use palm-sized devices distributed by European Internet registry RIPE-NCC to monitor and report on the efficiency of their Internet traffic routes.

Cyber security topped the agenda as 60 technology professionals from 13 countries gathered in Curacao for the second day of a major regional technology conference.

The meeting is the eighth gathering of the Caribbean Network Operators Group (CaribNOG) and the sixth in a series of Caribbean meetings hosted by the Latin American and Caribbean Internet Addresses Registry (LACNIC).

The choice of venue for discussions about Internet security seemed fitting. Curacao is an exceptional Caribbean island, in that its critical Internet infrastructure development allows it to offer data centre services to a global market.

Because technology-based enterprise is such an important part of the country's economy, cyber security is recognised as an important, said Shernon Osepa, manager of regional affairs for the Internet Society (ISOC) Latin America and the Caribbean, who is from Curacao.

"Curacao is not immune. We are facing the same challenges as the wider Caribbean. A lot of commercial banks in the region are being attacked, but they simply don't report when these attacks are done. So we know that they are happening but we don't know to what extent," Osepa said.

"These attacks are being masterminded by people who are highly educated, technically competent and very knowledgeable about Caribbean security vulnerabilities. This is their full-time job. And it is a global industry."

Osepa, alongside Albert Daniels, manager of stakeholder engagement for the Caribbean at the Internet Corporation for Assigned Names and Numbers (ICANN), delivered the day's first presentations, which focused on the need to secure critical Caribbean Internet infrastructure.

"2013 was the year of the mega-breach," Daniels said, explaining that the number of security breaches reported internationally hit a high last year, a trend that has continued in 2014.

Daniels said the region's businesses, governments and citizens needed to be made to better understand the real-world repercussions of unsafe practices in the digital realm.

One important aspect of education, he said, was to develop the culture and capacity to report confirmed or suspected cases of identity theft and other kinds of Internet-based criminal activity.

"If you live in the Caribbean, don't think that the hackers are not trying to use our systems to perpetuate their crime. Even in the countries where there are few reports, that simply means that attacks are continuing to occur but are going unreported."

"We in the Caribbean are not collecting data, so we cannot support our decision makers in taking the right cyber security measures. We need to start collecting our own data," she said.

"For example, if we collect data and we see that spam is a big issue, then we are able to tell decision-makers they should invest in solving problems with spam. You always need updated facts and figures to support informed decision-making."

In the following session, Mark Kosters, chief technical officer with the American Registry of Internet Numbers (ARIN) and Carlos Martínez, chief technology officer at LACNIC, took a more practical and in-depth look at the nuts and bolts of Internet security. Martinez said he was "very, very disappointed" with the security industry because their operatives were being motivated by the wrong incentives. He compared digital security to national security.

The final session of the day was a practical lab on network defense techniques, moderated by Fernando Gont of SI6 Networks.

"The best way to improve the security of your network is to break into it. You can't defend a network if you don't know how to attack it," Gont said.

After the lab, which walked participants through many basic and advanced concepts of network vulnerability and risk mitigation, the formal part of the day ended on a collegial note, with participants lingering in pockets of conversation long after the official close of the final session. Many were making plans to regroup for more informal social networking.

Welcome to this first daily recap of our activities at LACNIC in the Caribbean6-CaribNOG 8!

Caribbean people have an appetite for technology that rivals any region of the world. But who is working behind the scenes to maintain and upgrade the Internet-based services on which we've come to depend?

On September 29, the answer to that question was to be found in Curacao, at one of the most highly anticipated gatherings of the region's technology community.

Jointly hosted by the Caribbean Network Operators Group (CaribNOG) and the Latin American and Caribbean Internet Addresses Registry (LACNIC), this regional forum bears one striking difference from many other ICT-themed meetings in the region. It is widely regarded as a solutions-oriented forum.

"This is a place where issues relevant to the future of the Internet at a regional and global level are being discussed. It is not a talk shop," said Stephen Lee, CaribNOG programme coordinator.

Lee was among a panel of experts to deliver the orientation and overview in the morning session. The panel included Shernon Osepa, manager for regional affairs for Latin America and the Caribbean at the Internet Society (ISOC), Bevil Wooding, founder and executive director of Caribnog and Carlos Martínez, Chief technology officer at LACNIC.

"We found that working together with CaribNOG and LACNIC can effectively reach audiences in the Caribbean, which is an important subset of our service region."

The rest of the day CaribNOG, LACNIC and ARIN Updates where presented. There were two introductory presentations to RPKI and IPv6. Alejandro Acosta, R & D Engineer LACNIC, stressed the importance of being prepared to deploy IPv6.

The weeklong event, which runs from September 29 to October 3, is being held at the Hilton Curacao in Willemstad.